THE TRUE LEGACY OF THE CLOUGH TAYLOR MONUMENT 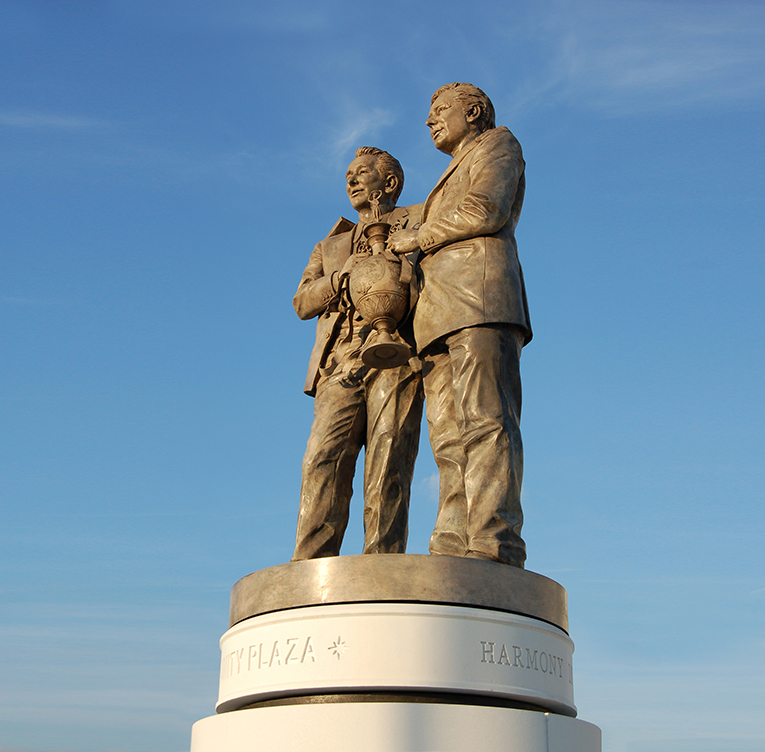 The Derby County match against Peterborough United on 27th August 2022 will be the twelfth anniversary of the unveiling of the statue of Clough and Taylor located outside Pride Park Stadium.

Today, just as it was in the Clough Taylor era, winning silverware is the barometer by which managerial success in football is measured.

Working with my good friend Garry McBride together with John Vicars, Ian Hodgkinson, Matthew Montague and sculptor Andy Edwards, we formed a steering group appointed by the Club responsible for the concept and creation of the Clough Taylor monument.

Whilst there was merit in celebrating the trophies won by Clough and Taylor, including the equivalent of today’s Premier League, in my capacity as the Club’s marketing consultant, my role was to ensure the monument was authentic, creative and well marketed.

Ironically, whilst the city of Nottingham already had a statue of Brian Clough, the decision-makers who commissioned that particular piece of art had omitted to recognise the role played by Peter Taylor during his six years at the City Ground.

Therefore, part of our remit was to ensure that Brian and Peter received equal prominence and recognition and, in doing so, reclaim Clough and Taylor as two of our own.

The initial inspiration for how the statue would look was a now famous photograph of Clough and Taylor holding the old first division trophy (‘The Lady’ as it was referred to) high above their heads at the Baseball Ground. 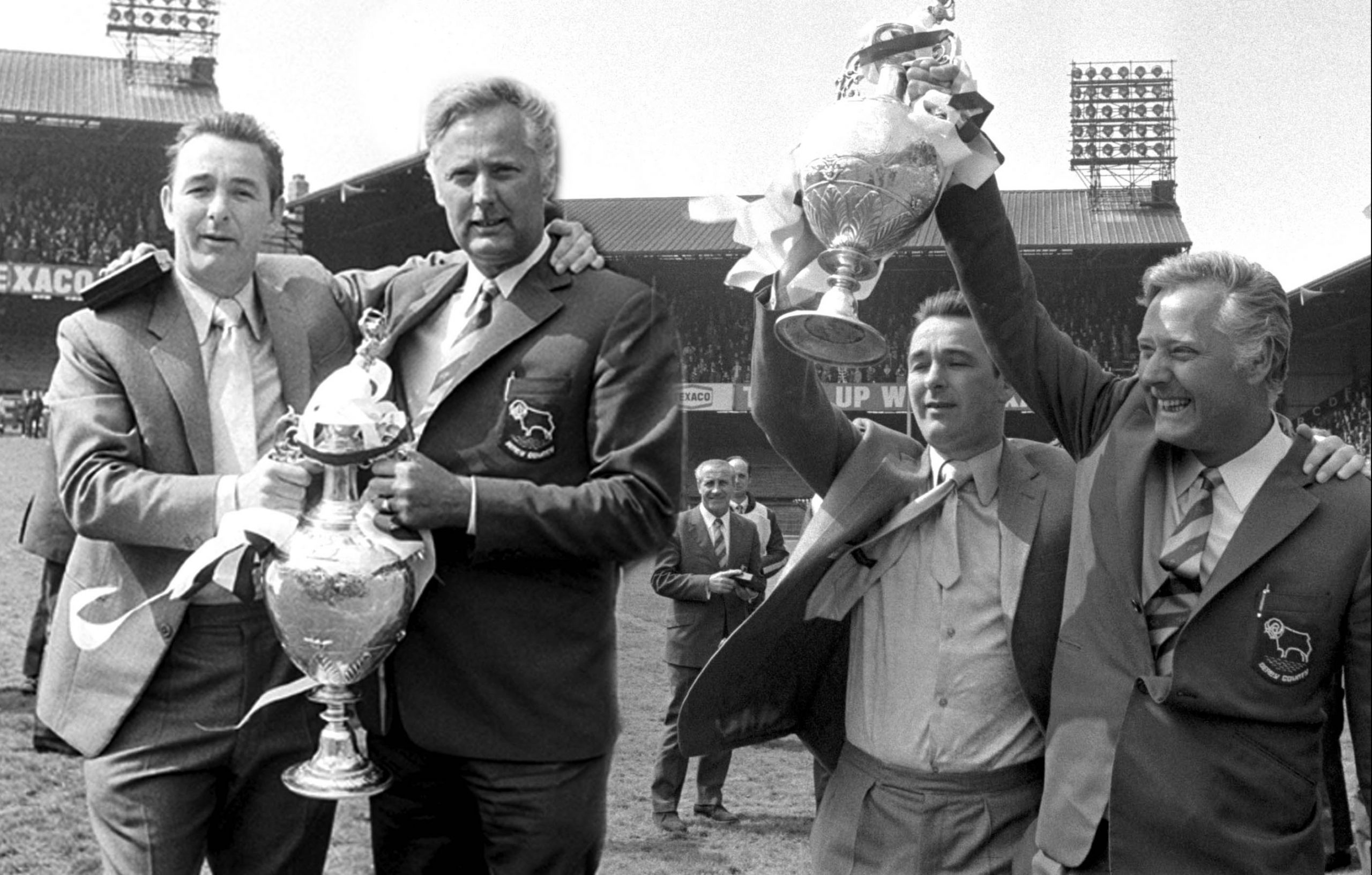 Whilst this image had received support from the project team, I felt quite strongly that this would be an opportunity missed if the focus of the statue was purely the winning of the league title in 1972 when they became ‘Champions of England’ for the first time.

As great an achievement as it was for Derby County, what made it unique in footballing terms is that it had been achieved by a managerial partnership, not a single manager. Therefore, after some deliberation, I was able to persuade the project team to use a similar photograph taken just a few moments later.

This photograph again included the trophy, but this time it was held at waist height with their arms still around each other. Sharing an experience with someone and the impact this has on life is often the most important thing we should celebrate. A trophy at the end of it, whilst a nice to have, should remain secondary.

A perfect illustration of my theory is that whilst winning the title was great for the Club and its fans at the time, it had an even greater impact on the town as a whole (Derby wasn’t a city back then) and something that stretched far beyond football.

While Clough and Taylor were working miracles with the football team, Derby’s largest employer Rolls-Royce was going through some extremely difficult times with the development of the RB211 engine. First, through management issues and later with spiraling production costs.

And by difficulties, I mean that the aero engine division ultimately became state-owned and the automobile division was sold off as a separate entity. The success of the football team however countered this by instilling hope and belief during some really dark times for the town.

Clough, as those that remember him will testify, was a man of many words. This is why I felt the monument was an opportunity to also include a powerful message around the base of the statue.

As with any partnership, in order for it to succeed, it has to be built on a solid relationship with a collective focus. Other key ingredients are hard work, dedication, trust, stability (ask current owner David Clowes) and, dare I say, an ability to survive when times get tough.

Ultimately what was inscribed on the plinth was not taken from one of Brian’s famous statements. As with the slogan ‘WE ARE DERBY’, something my marketing agency first installed above the main entrance to Pride Park Stadium in 2009, I am proud to say these words are mine. 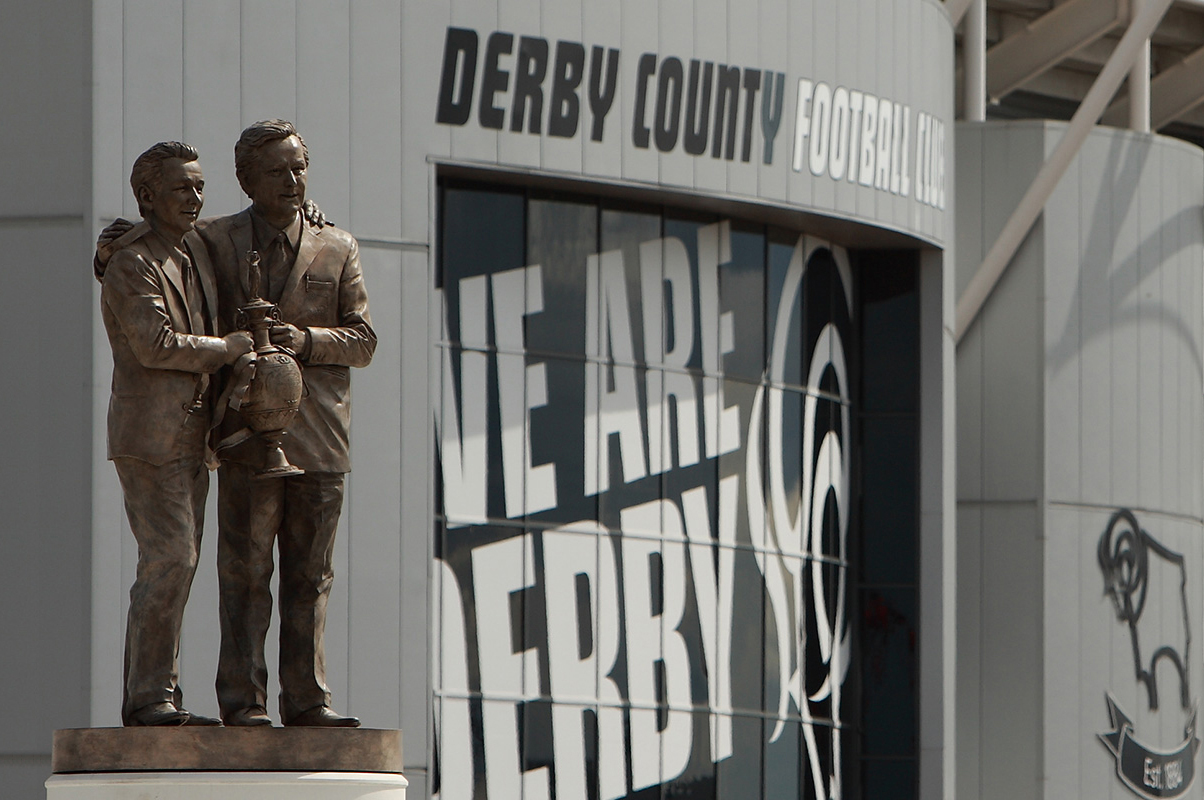 They were chosen because whether you are a football team or a business, a community or a neighbourhood, a married couple or just good friends, if you stick together, pull in the same direction, and do it with honesty and belief, you will ultimately ‘succeed’.

This was very true of Rolls-Royce back in 1971 and, again, with Bombardier in 2011. More recently the ‘fans march’ from the city centre to pride park saw tens of thousands of people from Derby and Derbyshire take to the streets in a show of united passion and pride for ‘an institution’ that for generations has been the bedrock of their community.

The concept of having a Clough Taylor statue evolved with the decision to include seating as part of a larger structure. After all, there wasn’t, and still isn’t, anywhere else for fans or visitors to sit and relax outside Pride Park Stadium.

The original plan was to use bricks reclaimed from the old Baseball Ground by Ian Hodgkinson as the base on which the statue would rest. However, this idea changed in favour of white and black stonework and landscaping, manufactured in Derbyshire by Evans Concrete. This decision opened up the art of the possible in terms of the size and scale of what could be achieved.

This is when I suggested that the base could be located on top of the shape of a compass, with Clough and Taylor at the centre, proudly facing in the direction of the old Baseball Ground. My proposal also included the introduction of 12 bronze plaques, one at each point of the compass.

These plaques were intended to act as both a poignant reminder of some of the stadiums where the duo had managed teams (including the City Ground, Nottingham) as well as symbolically positioning ‘Derby County’ at the very heart of football. After all, the Club was one of only 12 founder members of the football league.

Ironically, in doing so, it pushed their biggest footballing rivals very much to the peripheral of the game. How satisfying, and a little-known fact that may well be missed by many Derby County supporters today.

The same can be said for the title of the structure, namely ‘Unity Plaza’, and the words around the base of the statue, which I am often asked to explain the relevance to the monument itself:
HARMONY (always stand shoulder to shoulder, like on the fans march), INTEGRITY (be authentic and truthful, even if others are not), UNITY (always stick together, be united with one voice), SOLIDARITY (demonstrate a common goal and collected movement) and VICTORY (only when all the rest have been achieved can you hope to survive or thrive).

So, next time you are visiting Pride Park Stadium, take a minute to walk around the Clough Taylor statue, read the words, study the bronze plaques and dwell for a while in the seating area. ‘WE ARE DERBY’ is more than a statement about a place, it’s a footballing culture and a way of life. 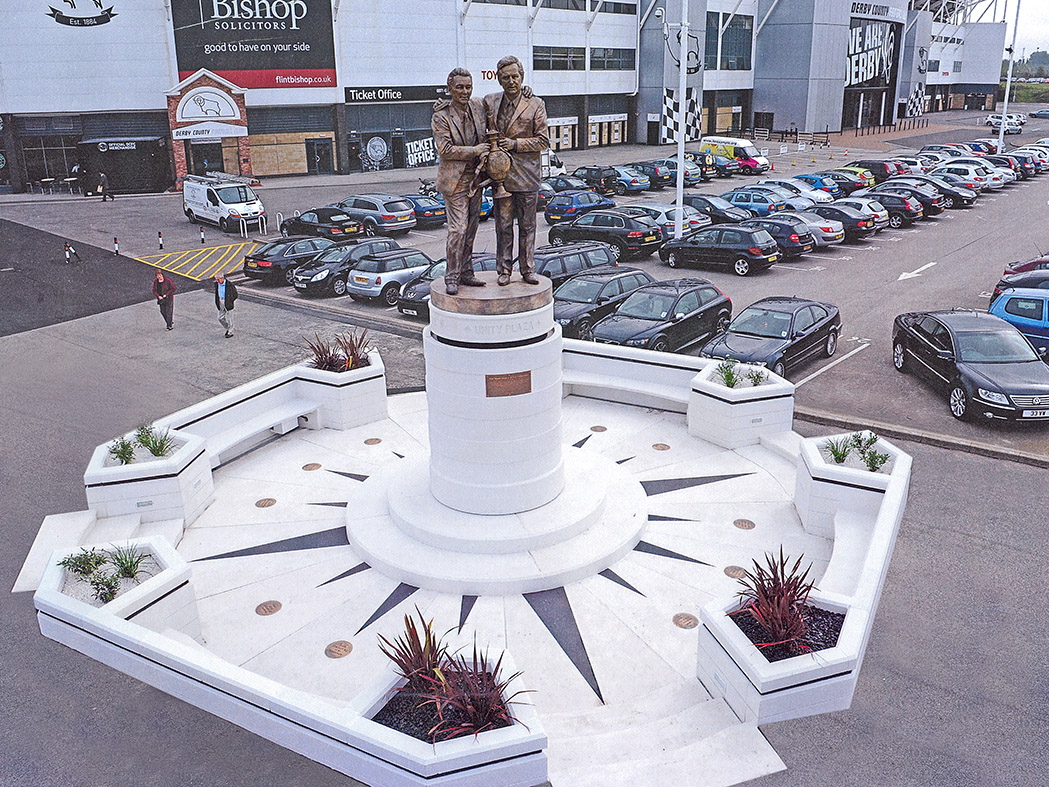 Spirit Medical in Düsseldorf for MEDICA 2022

Our client Spirit Medical is once again represented at MEDICA, the largest medical trade fair in the world, from November 15-18th. Taking place annually in Düsseldorf, it has been running for over 40 years and this year has attracted visitors from over 70 countries. Innovation for outpatient and inpatient care is a strong focus for…

Our co-founders David and Denise were joined at this year’s Prince’s Trust Charity Golf Day by Mark King and Steven White from 2bm Limited. The Prince’s Trust, which works with delivery partners from across the UK, offers hundreds of free courses, grants and mentoring opportunities to inspire and help young people to build their confidence…

Denise Leatt Co-founder of We are Kudos, dusted off her running shoes and completed the ‘Run 56 Miles Challenge’ in February to help raise money for Cancer Research UK. Denise is not a natural runner, but as you know loves a challenge! Denise ran 16 days out of the 28 days in February and towards…

We are Kudos director Denise Leatt not only raised over £650 for charity but also conquered her lifelong fear of height in abseiling 212ft down the Derby Cathedral.

A new brand with a touch of Thailand

Thailicious needed a rebrand. Using the existing name, the first step for We are Kudos was to explore the culture and delights of Thailand. Sadly, this didn’t involve a trip to Thailand, but lots of research into Thai culture and cuisine including the spices and flavours used in traditional cooking.

If you have a project you would like to discuss, we would love to hear from you.

Get In Touch
We use cookies on our website to give you the most relevant experience by remembering your preferences and repeat visits. By clicking “Accept All”, you consent to the use of ALL the cookies. However, you may visit "Cookie Settings" to provide a controlled consent.
Cookie SettingsAccept All
Manage consent

This website uses cookies to improve your experience while you navigate through the website. Out of these, the cookies that are categorized as necessary are stored on your browser as they are essential for the working of basic functionalities of the website. We also use third-party cookies that help us analyze and understand how you use this website. These cookies will be stored in your browser only with your consent. You also have the option to opt-out of these cookies. But opting out of some of these cookies may affect your browsing experience.
Necessary Always Enabled
Necessary cookies are absolutely essential for the website to function properly. These cookies ensure basic functionalities and security features of the website, anonymously.
Functional
Functional cookies help to perform certain functionalities like sharing the content of the website on social media platforms, collect feedbacks, and other third-party features.
Performance
Performance cookies are used to understand and analyze the key performance indexes of the website which helps in delivering a better user experience for the visitors.
Analytics
Analytical cookies are used to understand how visitors interact with the website. These cookies help provide information on metrics the number of visitors, bounce rate, traffic source, etc.
Advertisement
Advertisement cookies are used to provide visitors with relevant ads and marketing campaigns. These cookies track visitors across websites and collect information to provide customized ads.
Others
Other uncategorized cookies are those that are being analyzed and have not been classified into a category as yet.
SAVE & ACCEPT