Why exactly are there three lions on a shirt?

History records that the lion was first used by the Normans as the symbol of England during the 11th century. At this time a single lion was used on a red background, the red colour representing a battlefield. Over 100 years later, during the reign of Richard I (often referred to as Richard the Lionheart), two further golden lions were added to the crest.

Fast forward to 1872 and the first-ever competitive international football match for England against Scotland. It was felt that the shirts needed an emblem that represented national pride, so the Football Association made the decision to use the three lions as a symbol of ‘Englishness’.

Interestingly, the ‘Three Lions’ are officially a royal emblem, therefore The FA has to seek permission from the Royal Family when they need to use it – which means the logo is not the sole propriety of the organisation that it represents. For the 1966 World Cup final, as the designated away team England interestingly wore red shirts and white shorts to avoid a clash with the German’s traditional white shirts and black shorts.

Derby County legend Steve Bloomer, who played 23 times for England between 1895-1907 scoring 28 goals, is pictured below wearing his shirt with pride. 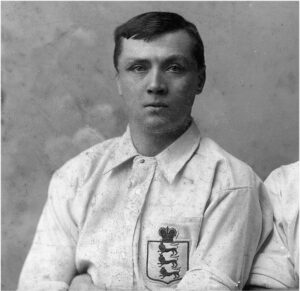 However, there was one minor design change undertaken in 1949, when the crown above the lions was removed in order to differentiate the badge from that of the England cricket team.

In May 2021, the FA revealed a new lion logo for its grassroots initiative England Football. It features a red lion, lioness and cub, and aims to give the crest “a fresh purpose that symbolises inclusivity at all levels of football,” according to an FA spokesperson. Personally, I’m not sure it will last the test of time in the same way as the current logo has basically remained the same for over 55 years.

Interesting that the FA has kept the traditional ‘Three Lions’ on the national shirt, as seen below. 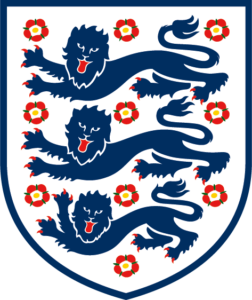 So, whether 55 years of hurt ends on Sunday night or not, it’s worth remembering the 1,000 years of history that inspired the lyrics “three lions on a shirt” in the now famous ‘It’s coming home’ anthem.

Our co-founders David and Denise were joined at this year’s Prince’s Trust Charity Golf Day by Mark King and Steven White from 2bm Limited. The Prince’s Trust, which works with delivery partners from across the UK, offers hundreds of free courses, grants and mentoring opportunities to inspire and help young people to build their confidence…

Denise Leatt Co-founder of We are Kudos, dusted off her running shoes and completed the ‘Run 56 Miles Challenge’ in February to help raise money for Cancer Research UK. Denise is not a natural runner, but as you know loves a challenge! Denise ran 16 days out of the 28 days in February and towards…

We are Kudos director Denise Leatt not only raised over £650 for charity but also conquered her lifelong fear of height in abseiling 212ft down the Derby Cathedral.

A new brand with a touch of Thailand

Thailicious needed a rebrand. Using the existing name, the first step for We are Kudos was to explore the culture and delights of Thailand. Sadly, this didn’t involve a trip to Thailand, but lots of research into Thai culture and cuisine including the spices and flavours used in traditional cooking.

Popular TV presenter Eamonn Holmes finally has his own way by buying his dream Bentley – thanks to Baytree Cars. Six years ago, Eamonn and wife Ruth Langsford appeared in Channel 5’s How The Other Half Lives and Ruth said: “If we ever won the lottery, I would dread what he would come home with.…

If you have a project you would like to discuss, we would love to hear from you.

Get In Touch
We use cookies on our website to give you the most relevant experience by remembering your preferences and repeat visits. By clicking “Accept All”, you consent to the use of ALL the cookies. However, you may visit "Cookie Settings" to provide a controlled consent.
Cookie SettingsAccept All
Manage consent

This website uses cookies to improve your experience while you navigate through the website. Out of these, the cookies that are categorized as necessary are stored on your browser as they are essential for the working of basic functionalities of the website. We also use third-party cookies that help us analyze and understand how you use this website. These cookies will be stored in your browser only with your consent. You also have the option to opt-out of these cookies. But opting out of some of these cookies may affect your browsing experience.
Necessary Always Enabled
Necessary cookies are absolutely essential for the website to function properly. These cookies ensure basic functionalities and security features of the website, anonymously.
Functional
Functional cookies help to perform certain functionalities like sharing the content of the website on social media platforms, collect feedbacks, and other third-party features.
Performance
Performance cookies are used to understand and analyze the key performance indexes of the website which helps in delivering a better user experience for the visitors.
Analytics
Analytical cookies are used to understand how visitors interact with the website. These cookies help provide information on metrics the number of visitors, bounce rate, traffic source, etc.
Advertisement
Advertisement cookies are used to provide visitors with relevant ads and marketing campaigns. These cookies track visitors across websites and collect information to provide customized ads.
Others
Other uncategorized cookies are those that are being analyzed and have not been classified into a category as yet.
SAVE & ACCEPT